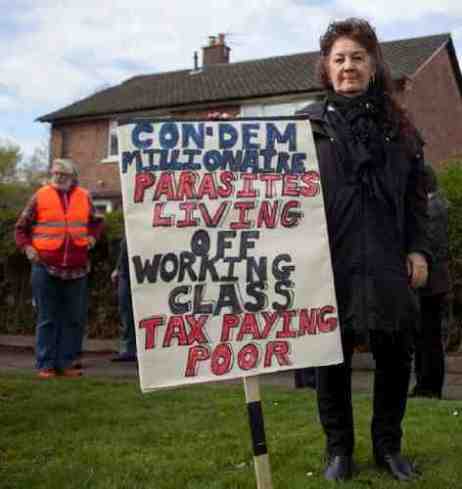 As reported in an article in the Salford Star, an eviction partly due to the bedroom tax was given a four-week reprieve in court today, shortly before bailiffs were due to arrive to evict a Salford woman called Vicky from her home. This was the first attempted eviction that the Greater Manchester Anti-Bedroom Tax Federation was aware of within the area. Two Left Unity members, including myself, attended a 60-strong protest outside her home. I have previously posted some Non-payment advice – also about “the new poll tax”, council tax payments of up to 30%, depending on council area, demanded from people on benefits (that have had far less publicity), to help people who want to go down the road of non-payment or have no choice due to poverty. I have written a song called The New Poll Tax (which briefly mentions the bedroom tax too).

If we compare the situation of Vicky, whose rent arrears were far smaller than the £5,800 disgraced Tory minister Maria Miller was forced to pay back, to say nothing of the £45,000 that she allegedly should have repaid (but was overruled by a committee of MPs) – see the Guardian article Public disgust at MPs’ expenses is the only thing that brought down Maria Miller which counters arguments that Miller was forced to quit due to some sort of media conspiracy – or the opposite view in Paul Demarty’s Weekly Worker article Rightwing press rocks the boat for more radical analysis with a lot of details, slightly spoilt by that paper’s pessimistic (as usual) viewpoint at the end, saying that the influence of the right-wing press is “another index of how rapidly British society is moving to the right”. Anger at expenses-fiddling by mainstream parties presents great opportunities for Left Unity, and indeed the Trade Unionist and Socialist Coalition (TUSC).

As reported in a news release from Left Unity, “Without getting carried away, Left Unity played its part in her downfall. Labour’s Ed Miliband, ridiculously, refused to call for Maria Miller to quit – while Left Unity called a protest at Downing Street, as covered on LBC Radio and Huffington Post. Miller resigned that morning, before the protest, but our call for her to face criminal investigation still made it into the Telegraph, Express and Herald“.

It has been a socialist tradition, to try to prevent politicians from selling out, that MPs (and MSPs, MEPs, etc.) only receive a worker’s wage (generally the average wage of a skilled worker), which was adhered to by members of the Militant Tendency who became Labour MPs and all six Scottish Socialist Party MSPs. Politicians should be allowed to claim reasonable expenses, but certainly not mortgage payments on second homes, which was used by Miller for example, and changing to rent is definitely a step forward. However, David Cameron has not kept his promise to make politicians who have been convicted of corruption subject to recall by their constituents, meaning that they would have to stand for re-election to keep their seats, and many socialists argue that even if they have not been convicted of anything, all MPs should face potential recall as well (perhaps if a petition signed by some proportion of the electorate in a constituency call for one). For example, Labour’s Hazel Blears faced a Hazel Must Go! campaign that achieved considerable support due to Blears’ expenses fiddling as reported on Wikipedia. However, when it came to the 2010 general election, and the choice was seen as being between Labour, Tory and Liberal Democrat candidates, she won the newly created Salford and Eccles seat.

One of the problems of so-called “democracy” as it operates under capitalism is that waiting until politicians call a general election lets them off the hook if there is a massive mood for change in the meantime. This is not just an issue as far as individual MPs’ expenses is concerned, but bringing down massively unpopular governments – which tend to be particularly unpopular due to them breaking manifesto commitments, like “No top-down reorganisation of the NHS” (Tories) or “No increase in student tuition fees” (Lib Dems). Unpopularity often arises too from austerity measures (cuts and/or tax rises), which actually leads to people dying as my Austerity Kills song states. Although I am not in favour of a socialist society run solely in the interests of the working class, or controlled just by workers, but with a government elected by proportional representation in addition to some degree of workers’ control and direct democracy (for reasons stated in the About Steve Wallis page on this blog), I recognise the importance of workers in changing society, or in bringing a government down to force new elections which may lead to a socialist society, by withdrawing their labour – particularly in a “mass strike” from below or a “general strike” from above. I proposed an amendment to the Left Party Platform’s statement of aims at Left Unity’s founding conference, that got passed, on adding this to the party’s statement of aims (which would otherwise have been too electoral for my liking). END_OF_DOCUMENT_TOKEN_TO_BE_REPLACED

The current edition (20 February 2014) of the Weekly Worker (the newspaper of the Communist Party of Great Britain) includes a letter of mine. I disagree with quite a lot of their politics instead of a broad socialist party like Left Unity, they advocate a Marxist party, and set up the Communist Platform of Left Unity to argue for such a party and “communist” views in LU), but their letters page is open to a wide range of left-wing arguments. This issue is broader than just the CPGB, since the SWP and Socialist Party are in favour of some sort of “workers’ state” rather than a society where everybody is in control.

Although I have had a few letters published on the subject of proportional representation (which had some success in them supporting PR, albeit with a party list system which gives a lot of power to party machines, whereas I generally favour single transferable vote but am not particularly prescriptive nowadays), they have always previously cut out sections of my letters in which I argued for PR under socialism – rather than just something to advocate under capitalism to be replaced by some sort of “workers’ state” after a revolution.

My (fairly) minor gripe is that the section of the Communist Platform on “republican democracy”, that I praised wholeheartedly, was cut from the letter. [It is at http://communistplatform.org.uk/?p=30 and I had previously added a comment there on much the same lines, which had been approved by a moderator.] That section reads as follows:

Left Unity does not counterpose democracy to socialism. Democracy is much more than voting every four or five years. Democracy is the rule of the people, for the people, by the people. To make that aspiration real necessarily means removing all judicial, structural and socio-economic restraints on, or distortions of, popular control from below.

END_OF_DOCUMENT_TOKEN_TO_BE_REPLACED 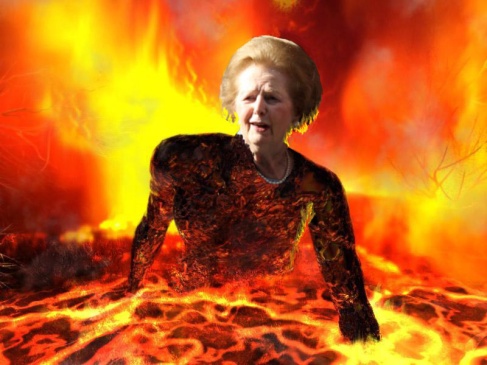 2013 was quite a good year for the left, particularly in Britain. I will summarise by listing items from my blog about some of the things that happened last year:

By far my most popular blog entry towards the end of 2013 was Is MoneyWeek’s “End of Britain” just fearmongering? What about US debt default? Is socialist revolution on the cards? with “End of Britain” being heavily advertised by the (allegedly) most popular stock market investors’ magazine MoneyWeek and my blog entry being in the top 10 of Google searches for it. MoneyWeek predicted inevitable economic and social chaos in Britain, and the UK going “bankrupt” if inflation reached about 5%. The issue of whether British capitalism is very healthy (as reformists who claim Britain is “the seventh richest country in the world” argue) or in dire straits (as Max Keiser and Stacy Herbert argue in The Keiser Report, on RT and YouTube, hence them shifting their TV programme from the USA to London) is probably the most important debate socialists can have to determine strategy. The former banker Frances Coppola, who “debunked” the MoneyWeek video/letter has started debating with me on the above-mentioned entry on my blog, after I demolished the arguments of Martin Odoni, a follower of the US “unorthodox post-Keynesian economist” Warren Mosler, so I am directing those particularly interested in that debate there (especially if you wish to comment on my views on the subject). But let me just leave you now with the following thoughts: