[EDIT 23/4/14: Left Unity’s internal elections are now underway. They will close at midnight on Tuesday 6 May 2014. The statement below, that also appears on the North West elections page on the LU website, is very slightly modified from the one previously on this blog (to increase the number of issues I’m campaigning on).]

The following text is my statement as a candidate for one of the four vacant seats (at least two of which have to be female due to the women’s quota rule) from the North West region of Left Unity on the National Council. I was nominated by Alison Treacher (Stockport LU) and Tom Armstrong (Manchester LU). Left Unity members can vote via the Internal Elections page (but you will only be able to vote for me if you live in the North West of England). END_OF_DOCUMENT_TOKEN_TO_BE_REPLACED

A diagram of how fracking works

In the BBC1 TV programme on Monday (27 January), “Inside Out North West” (which those of you in the UK, and those abroad who pay a license fee, can watch or download on BBC iPlayer for a limited time period – or view on YouTube if it hasn’t been deleted due to copyright), there were some dramatic revelations that could put an end to fracking in Britain. You may prefer to read my transcription of the entire contents, if you don’t have wi-fi, to avoid missing important details, or to read a few comments of my own (which I have placed without indentation):

Dianne Oxberry, Presenter, Inside Out North West: “Tonight, Paul Rose investigates how the fracking industry plans to dispose of radiation in its wastewater.” The implications of that radioactivity are so severe according to some experts that it could put the whole of the industry in this country in a state of limbo!

END_OF_DOCUMENT_TOKEN_TO_BE_REPLACED

[EDIT: 1/2/2014: Modified to include embedded YouTube video, and other text changed after the lyrics. The lyrics have also been changed in minor ways, to reflect the recording on 30 January – but only by removing the odd “ah” and “yeah” which were clearly ad libbing in the original Beatles track!]

END_OF_DOCUMENT_TOKEN_TO_BE_REPLACED 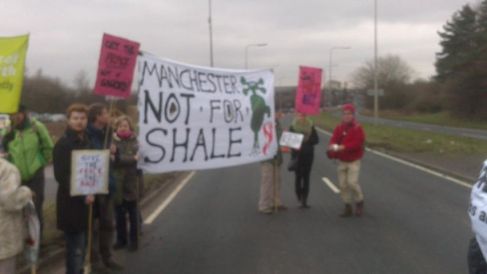 I went on a march on Sunday (along with around 1,000 others at the very least – the BBC apparently had the cheek to say 100-200 then, but said “hundreds” yesterday) to the anti-fracking camp at Barton Moss (in Irlam, Salford, Greater Manchester) where drilling for shale gas (known as “hydraulic fracturing” or “fracking” for short) is taking place by the company iGas.

Fracking was top of the news agenda yesterday on most if not all TV news programmes in the UK – and was also featured heavily on RT (Russia Today, Freeview 85). This was partly due to direct action by protesters that day (including getting on top of a tanker and holding up traffic) and the high policing costs that could make it uneconomic, and partly due to UK prime minister David Cameron doubling the bribe to councils from 50% of the business rates to 100% (giving back with one hand a bit of what he has taken with the other as part of the austerity agenda), clearly scared about the unpopularity of fracking, which should be massive in urban areas as long as campaigners put across effective arguments. The benefits to residents however are tiny – £100,000 may be a lot per person if there are just a few farmers nearby, but it is ridiculous to expect city-dwellers to accept a minuscule share of that money, plus the 1% of revenues if shale gas is found (compared with 10% in some countries overseas), even if there is just a small chance their tapwater will be undrinkable like in Dimock in the USA as covered up until revealed in a Huffington Post article, or even get skin lesions from showering in water contaminated by fracking: “The first person in Dimock to discover that there were problems with the water was Norma Fiorentino, whose water well exploded. And it took a little while and, for a certain period of time, some of the residents were still showering in the water and drinking the water and were experiencing a lot of the health impacts and dizziness and skin lesions. And, of course, the long-term effects aren’t known. But, over time, they started to realize that the water is not safe to use.” Some other problems are listed in an article I co-wrote for an issue of Revolutionary Platform News: Number 6: “mini-earthquakes, subsidence and noise for those who live nearby (hence reduced house prices), heavy use of water, radioactive contamination, carcinogenic chemicals”. If councils accept the bribe, expect a lot of the councillors to lose their seats in the local elections in May!

It is the point mentioned above about putting across effective arguments that I am particularly concerned about – arguing for tidal power (sometimes called “tidal energy”) and putting serious amounts of research and development (R&D) into that technology (at last taking place from 2012 in Scotland but with an investment of a mere £30 million according to this article, the same amount as the French company Total is investing into just one Lincolnshire drilling project according to the Independent due to fracking being banned in France and the lucrative profits – part of the solution to solving environmental problems is revolutionary change involving overthrowing the leaders of such companies without compensating rich shareholders and running them democratically by ordinary people). I fully agree with arguments about moving away from fossil fuels (including shale gas obtained from fracking) and opposing nuclear fission, and instead investing in renewable forms of energy. Unfortunately, however, the renewables suggested by speakers at the protest on Sunday limited suggestions to using wind turbines (which don’t work when there’s no wind or even too much wind and they produce little power compared with their cost) and solar panels (which aren’t particularly efficient either in the UK).

Furthermore, there is a shortage of rare earth metals used for both technologies (wind turbines and solar panels) as revealed in a November 2013 Yale University report  by Nicola James entitled A Scarcity of Rare Metals Is Hindering Green Technologies:

END_OF_DOCUMENT_TOKEN_TO_BE_REPLACED

The extrajudicial killing by a police officer of yet another black man Mark Duggan has caused massive outrage in Tottenham (London) where the shooting took place and across the UK. The jury came to the conclusion that Duggan had a gun (hidden in a sock without fingerprints or DNA evidence and with two witnesses testifying that it was planted by police) but threw it an unfeasibly long distance away before being shot by a police officer – even if true, that officer would have noticed he was unarmed at that point! Yet somehow the jury came to the conclusion that the killing was “lawful”.

END_OF_DOCUMENT_TOKEN_TO_BE_REPLACED

2013 was quite a good year for the left, particularly in Britain. I will summarise by listing items from my blog about some of the things that happened last year:

By far my most popular blog entry towards the end of 2013 was Is MoneyWeek’s “End of Britain” just fearmongering? What about US debt default? Is socialist revolution on the cards? with “End of Britain” being heavily advertised by the (allegedly) most popular stock market investors’ magazine MoneyWeek and my blog entry being in the top 10 of Google searches for it. MoneyWeek predicted inevitable economic and social chaos in Britain, and the UK going “bankrupt” if inflation reached about 5%. The issue of whether British capitalism is very healthy (as reformists who claim Britain is “the seventh richest country in the world” argue) or in dire straits (as Max Keiser and Stacy Herbert argue in The Keiser Report, on RT and YouTube, hence them shifting their TV programme from the USA to London) is probably the most important debate socialists can have to determine strategy. The former banker Frances Coppola, who “debunked” the MoneyWeek video/letter has started debating with me on the above-mentioned entry on my blog, after I demolished the arguments of Martin Odoni, a follower of the US “unorthodox post-Keynesian economist” Warren Mosler, so I am directing those particularly interested in that debate there (especially if you wish to comment on my views on the subject). But let me just leave you now with the following thoughts:

END_OF_DOCUMENT_TOKEN_TO_BE_REPLACED

[Note that WordPress is censoring me for the first time – I sent out a similar post to this one that included the full text of the newsletter. That post doesn’t appear from the main www.thatcheroftheleft.wordpress.com page and going directly to that post (at https://thatcheroftheleft.wordpress.com/?p=770) sometimes produces an error message and sometimes displays the post! I suppose this goes to show something I knew already, that revolutionary change can’t take place just on the internet. Sometimes you need to interact in the real world – and going to TUC conference to hand out paper copies of the newsletter and talking to people is part of that! This suggests I’m doing something dangerous to the powers that be (the ruling class, i.e. big business) though and I strongly recommend reading it by going to www.revolutionaryplatformofleftunity.org/news/6.html.]