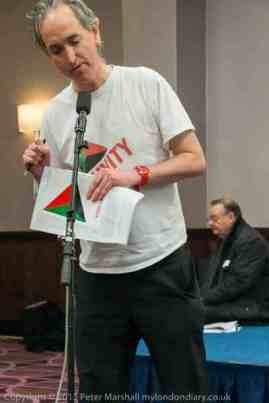 Me at founding conference in November

As some of you will know, I was unable to attend the Left Unity (LU) policy-making conference in Manchester on 29 March. I did attend and speak at the founding conference in London on 30 November 2013, getting one of my amendments passed making LU much more revolutionary on trade unions, as described in my blog entry Compromise between the Left Party Platform and Socialist Platform: Justification for my amendments to LPP. However, after the Manchester conference, it is even more clear that there is an ongoing struggle between those who advocate a more revolutionary approach and those who want LU to limit itself to reformist demands (even though some of the latter are actually revolutionaries or are in organisations that claim to be).

There is a concerted effort by many within LU (as well as those outside like the SWP) to portray the party as “reformist” or “left reformist”. Indeed, in opening the discussion on the economics commission document, Pete Green said that the programme in the document is reformist. This is despite the fact that when I went to the meeting to discuss the document in London, it was described as “a transitional programme” (I can’t remember whether Pete himself used that term but he certainly didn’t object).

There is a big difference between putting forward a set of demands, many of which cannot be implemented under capitalism, that is the transitional approach of the Socialist Party (formerly Militant, that I was in from 1990-98), and simply presenting a set of moderate reforms (the approach of other “left unity” approaches including the Socialist Alliance, before its abolition largely by the SWP in favour of Respect, and Respect itself as an even more moderate party that generally avoids even mentioning socialism at all). In truth, the demands on tax in the document are indeed left reformist but some demands in other sections can more accurately be described as transitional and amendments passed at the conference make LU’s economic policy even more so.

To be charitable towards Pete, part of the point of “transitional demands” is to appear reformist even if you aren’t! If you actually argue publicly (in front of those in the room and on the live stream if it was working at the time, but wasn’t, and later appearing on YouTube) that the point of those demands is to bring capitalism down, then that undermines the point of being “transitional”! Arguably a reason why LU has got much more publicity in the mainstream media than the Trade Unionist and Socialist Coalition (TUSC) is that we come across as more moderate.

As far as I’m concerned, we are a broad socialist party rather than a reformist party, which is very important because gradual reforms cannot bring capitalism down, and ending capitalism (which was explicitly added to the Left Party Platform statement of aims by a Camden amendment, and accepted by the founding conference) is vital since reforms in the interest of the masses that can be afforded during booms cannot when there is a recession or slump.

It is good that both amendments I put forward (via Manchester) to make our policy on the economy more radical were accepted.

Making the explicit point that “shareholders (capped at a certain level so that large shareholders lose most of their investments)” when shares are converted to government bonds as compensation for nationalisation, rather than adding to the national debt, was actually accepted into the document anyway – presumably because we discussed exempting those on companies’ boards from compensation at the meeting but didn’t come up with good wording and my proposal is clearly better.

My other amendment, on nationalising “companies that attempt to destabilise a Left Unity government, by a ‘strike of capital’ or by trying to transfer assets overseas” (1D) was presented by a different LU member in Manchester, Laurie McCauley, in my absence and “overwhelmingly carried” at the conference. However, it is clear from reports of the conference, at Left Unity Policy Conference: a further small step forward, but…… by Pete McLaren of the Independent Socialist Network and Left Unity: ‘Moderate’ party takes shape by Peter Manson in the Weekly Worker, that Laurie got confused when presenting the amendment and argued for “the public ownership of other essential services, including the giant supermarket companies, which dominate the retail trade and much of the agricultural and food industry in this country” which was actually in the original document! This may have been my fault, in including the text of that paragraph of that document before the amendment, but Laurie was at the Manchester meeting at which I proposed it. At least the latter link above does mention “companies that attempt to destabilise a Left Unity government” so Laurie must in part of talked about what he was supposed to be proposing!

Some of you will be wondering why I have to speculate about what Laurie actually said now that the videos of conference have been published on YouTube. However, the video at Left Unity National Conference 2014 (04b) – Peter Green-Economic Policy Report 2/2 jumps from the proposer of amendment 1C to debate from the floor, skipping entirely past Laurie proposing my amendment (1D)! A speaker, who didn’t give his name, did say in the debate from the floor that in support of 1D that it should be uncontentious that we nationalise a company that “opposes the government”.

It certainly appears that the jump in the video was deliberate (and the same may well be true for the live streaming). Even glitches in software that appear random usually have some underlying cause, especially when there are important issues at stake like in this case. It is more likely to be caused by artificial intelligent algorithms as part of PRISM than a random glitch! I will leave it to readers to assess whether a human censor is responsible!

[EDIT 6/4/14: Without evidence that deliberate censorship by whoever edited the videos is responsible, I withdraw the final accusation. I also regret that those who have already read this post may have come to that conclusion. I encourage readers of this blog entry (particularly those who are members or considering becoming members) to read comments I have posted below for an alternative explanation (on the lines of what I said above about PRISM but more convincingly and with evidence). I do think that a lot of things that happen in the world are planned, by a combination of computers and human minds, and that those who think that important interactions often happen randomly are naïve.]

4 thoughts on “29 March #LeftUnity conference: The ongoing struggle between revolutionaries and reformists”